SPARC held its first ever Debate Watch Party at the Fremont Hills Country Club in Los Altos Hills on Wednesday, September 16, 2015, as more than sixty members and guests gathered to wine, dine, and watch the second Republican Presidential Debate on CNN.  Carly Fiorina, the former HP executive who until very recently was a resident of Los Altos Hills, was declared the hands down winner in a straw poll following the event. 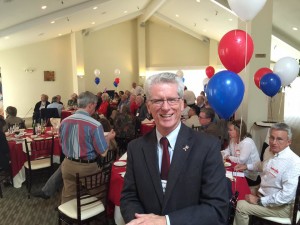 SPARC president John McDonnell of San Mateo is clearly enjoying himself at the Debate Watch Party gets underway.

Straw poll preferences showed that going into the debate–at least among SPARC-ies–Donald Trump led the field of eleven candidates who took the stage. But as the long night wore on, the SPARC crowd cheered Mrs. Fiorina’s well-informed answers on foreign policy and roared when she calmly zinged Trump for his denigration of her looks.

“Women all over this country heard very clearly what Mr. Trump said,” she said, looking straight into the camera. Channeling her inner Margaret Thatcher, Fiorina commanded the stage in a suit of Maggie Thatcher blue.

Next to Fiorina, candidate Marco Rubio gained the most from his debate performance according to the post debate SPARC straw poll, beating out Trump for second place among the field of eleven candidates. 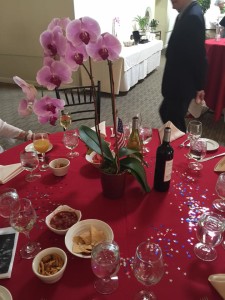 Maybe the wine helped to make the three-hour-plus debate seem not quite so long?

All the candidates scored points as did CNN for its handling of a debate with eleven contenders vying for their moment(s) in the sun. The debate ran over three hours and yet, at least at the SPARC event, not a soul was bored.

The Debate Watch Party was a first for SPARC but will likely not be the last. “When is the next debate?” asked SPARC president John McDonnell. “Let’s have another party!” 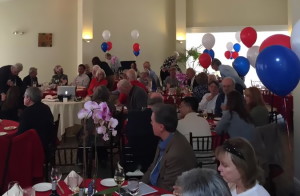 It is the essence of the American political process. Democracy at work means citizens caring about who gets elected. Join SPARC, get involved, and help change our country for the better!

SPARC makes news more and more often! Check out this story by San Jose Mercury News political writer Josh Richman about Fiorina’s performance in the debate. In the last paragraph he makes note of SPARC’s debate watch party! (Click the link below for more.)

SPARC Debate Party in the News